There has been a strong move by the Queensland Government, as well as other state governments, to create larger high schools. The Corinda State High School is one of 17 schools across Queensland that will experience this expansion over the next decade.

Gray Puksand devised a master plan for this school, located in Brisbane’s western suburbs. The master plan designated a central position on the four-hectare site that would not only benefit students, but also the broader community who would also have access to the new facilities. And while the school, including the principal, and business manager, adopted this move, there was not a preconceived idea as to what the new school building should look like. One of the key words used early in the briefing sessions was ‘excellence’, a reflection on the school’s reputation for being one of the finest in the state in terms of academic achievement. “Our brief from the State Government and from the school included a multi-storey building that would take students from a secondary, to a tertiary-style environment,” says architect Michael McShanag, a Senior Associate with Gray Puksand and project architect for this resource centre.

The result is a three-storey learning/resource centre that incorporates elements and materials found in the existing suite of school buildings, including red bricks that were used in the 1960s. The past has also been taken into the future with the use of white steel cladding. And rather than standing in isolation, the centre embraces the adjacent playing oval that includes a running track at the edge. The three levels also transition between secondary and tertiary in the type of spaces that will be provided. At ground level, there will be a focus on a stronger teaching environment. However, on the second and third levels, there are more opportunities for students to work independently, not dissimilar to the type found in tertiary institutions. “On the top level, there are larger floor pates and more generous volumes. But there are also smaller pockets for students to study on their own,” says McShanag.

This new complex will include resource centres, theatrettes, breakout areas and also external learning spaces. Pivotal to Gray Puksand’s design is the bleacher that extends across the three levels that can be used for lectures, informal catch-ups and a place for students to have their lunch. The architects also included a separate staircase adjacent to the bleacher to ensure any gatherings were not infringed, whether it was students or the wider community using this area. As found in buildings on a tertiary campus, there will be double-height voids, generous glazing, and a high degree of transparency through the spaces. Outdoor roof terrace, kitchenettes and flexible learning spaces are all provided. And rather than the stuffy old classrooms from the past, these spaces will be well ventilated and protected from the afternoon western light (external blades on the western elevation have been included).

An important part of the brief was to create a design that would engage not only with the students and teachers, but also with the local community. So when the large glazed doors at ground level are pulled back, there’s a sense of welcome for all. 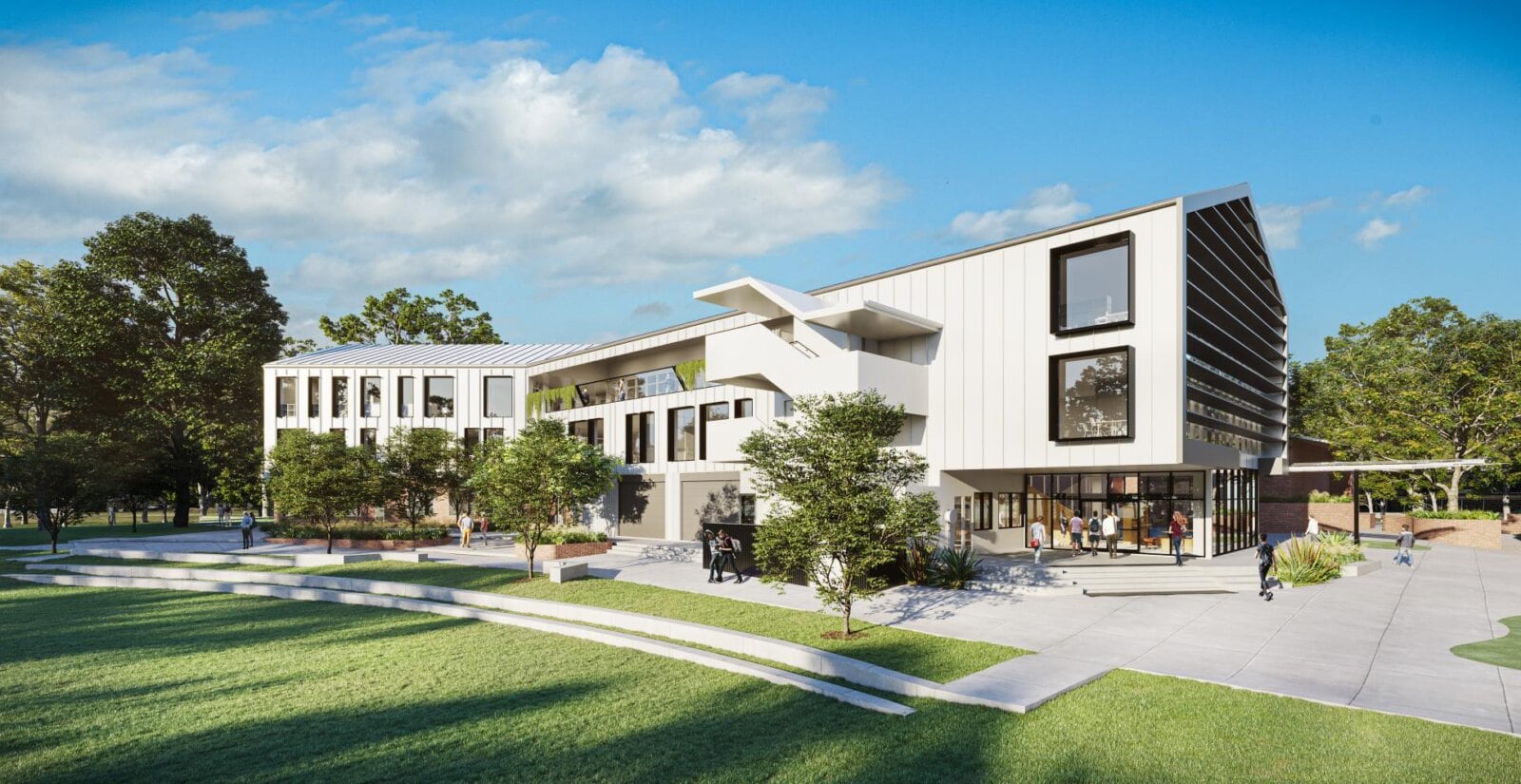 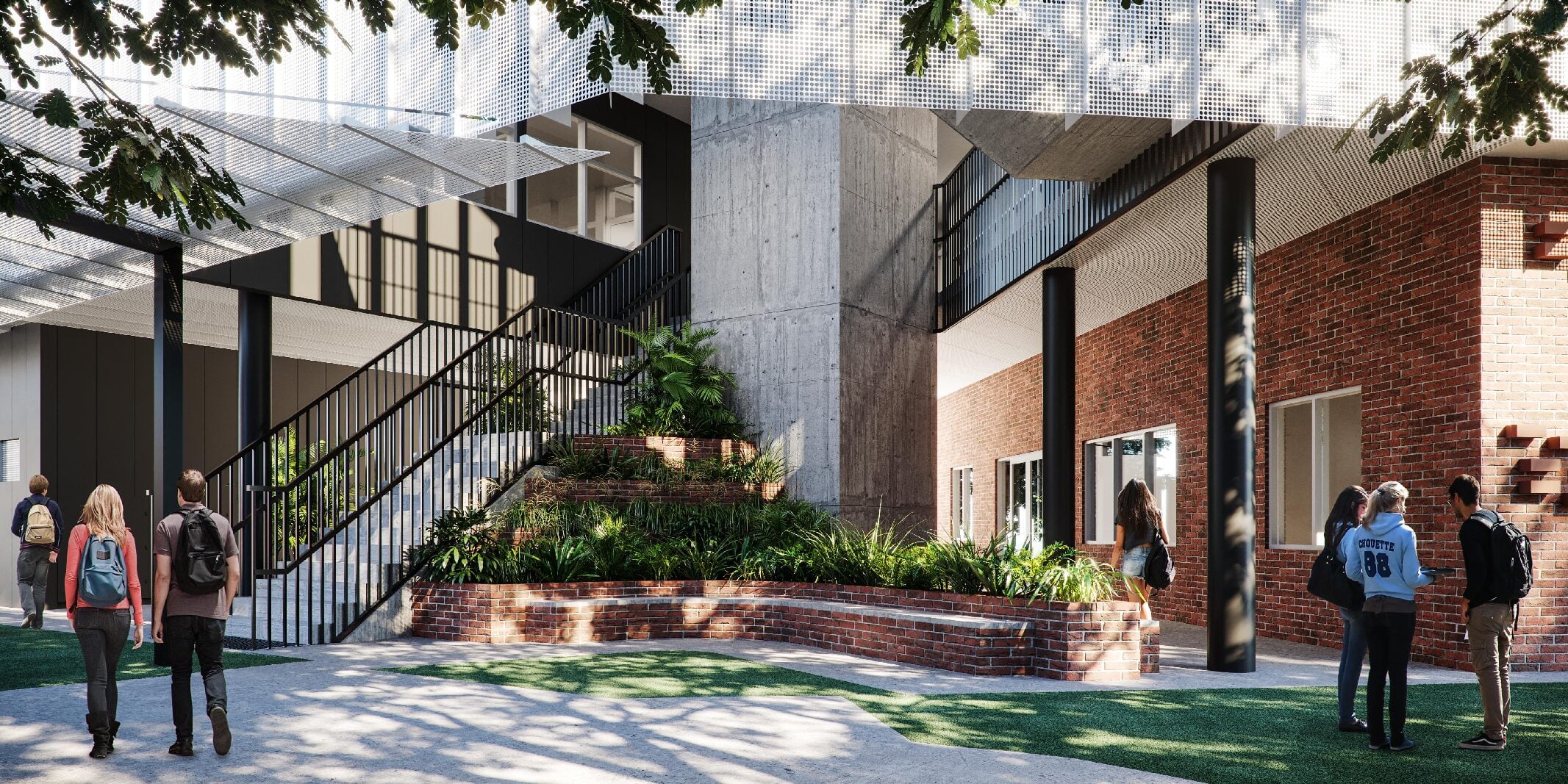 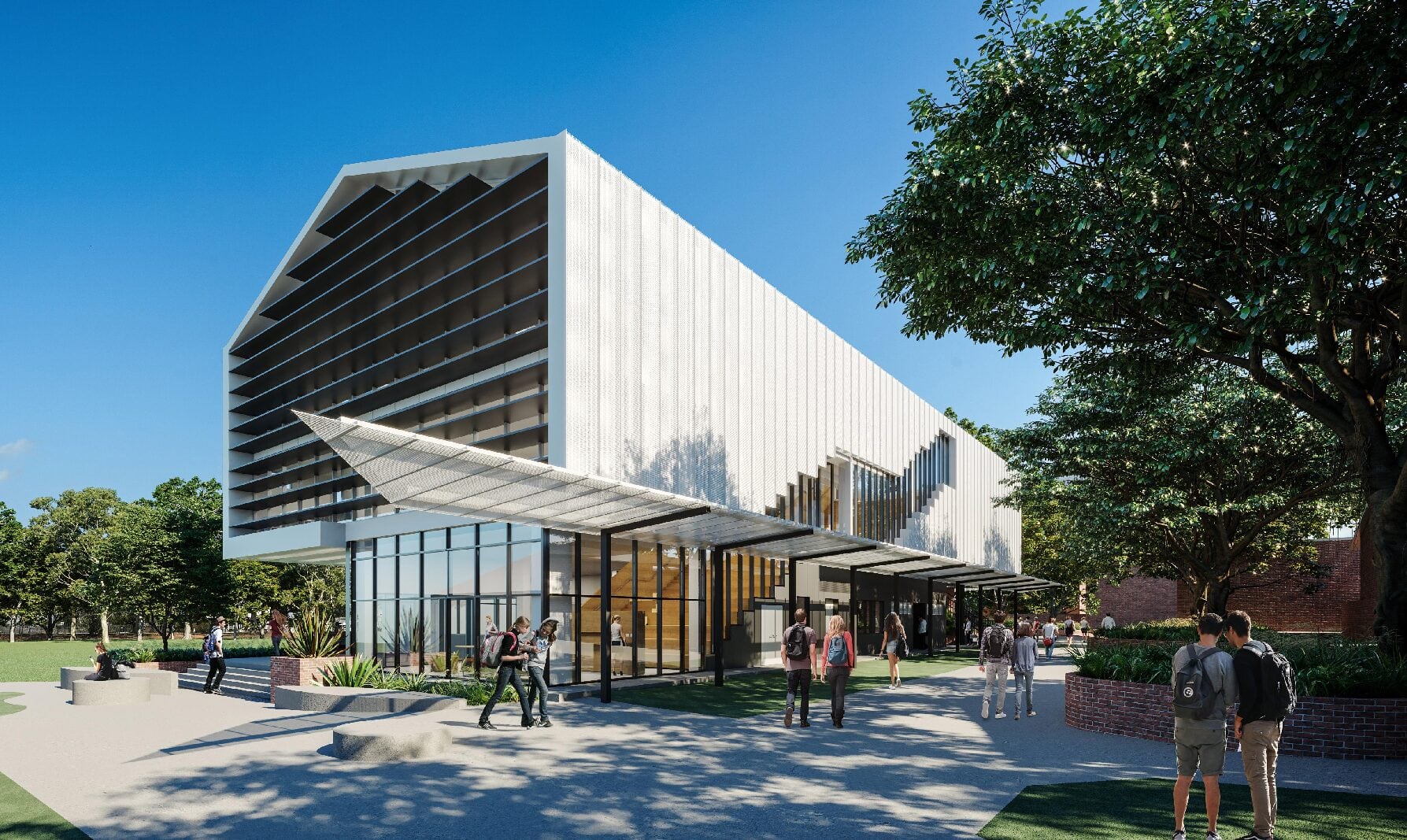